Mary S. Black is the author of Peyote Fire, a novel set 4,000 years ago in the canyonlands of southwest Texas.

Learn more about her at http://www.marysblack.com, or find her on Facebook. She also participants in the Prehistoric Writers and Readers Campfire on Facebook and Goodreads. Her book is now available on Amazon.

Tell us a little bit about your new book.  What’s it about?

Peyote Fire is the story of people who created incredible rock art in southwest Texas over 4,000 years ago. This area is known as the Lower Pecos region today, and is located right on the Rio Grande, about 50 miles west of Del Rio,Texas. Archaeologists have identified over 300 rock art sites in four different styles in this area. My protagonist, Deer Cloud, is painting just such a mural when his powerful grandfather dies, and his life changes.   Deer Cloud is called to walk the shaman path and finally, to bring the buffalo through his visionary power.

To reach his goal, Deer Cloud must visit five mythical wolves who make him fear for his life and his sanity in order to become a shaman. Of course he must ingest powerful hallucinogenic herbs to see the wolves, and that frightens him even more. He must learn to overcome his fears and find his true life.

The female shaman, Jumping Rabbit, takes an interest in him, and introduces him to a little cactus, peyote. Peyote naturally grows in the Lower Pecos and has been used for thousands of years as a powerful medicine. However, this new drug threatens another shaman, Stone Face, who wants to hold on to his own power. When scouts spy a herd of buffalo several days away, Stone Face challenges Deer Cloud to call the beasts using his new spirit helper.

Of course Stone Face uses his own songs and hallucinogenic drugs to call the buffalo. The herd comes and are stampeded over a cliff 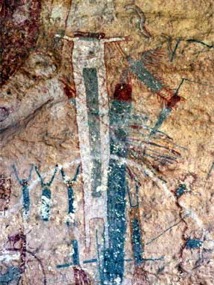 in a horrific scene. But whose magic really called them? Stone Face or Deer Cloud? The one with the most powerful magic will lead the people from now on.

What inspired you to write about these people?

I’ve made many trips to the Lower Pecos over the past 25 years to see rock art and other archaeological sites. Every time I’ve seen these rock art panels, I always wondered who made it. I’ve always wondered what the artist thought about as he or she painted the stories in the rockshelters. The paintings are complex, and up to now, little has been known about their meaning. Today, researchers are making great strides in interpreting these stories from the past, so it’s very exciting. (Photo, right: White Shaman rock art panel, the same image that appears on the cover of Peyote Fire.)

The remains of a huge buffalo jump in one of the smaller canyons have been known by archaeologists since the 1930s or before. It’s estimated over 800 animals died in one amazing episode, and many bones are still there today. So part of the story is based on this as well.

I wanted to make these ancient people walk and talk in my novel, using everything archaeologists and others have learned about their culture to bring them to life.  (Photo left: spring in the Lower Pecos Canyonlands)

What differences between their era and ours do you find most striking?

Well, certainly the people had a completely different world-view than we do today. Yet they had explanations for the phenomena of the world. Generally their explanations centered on the behavior of certain gods, such as Father Sun or Mother Rain, but often included the behavior of animals as well. For example, in my book, the people’s explanation for fire is that Possum discovered Fire already in the wood, and brought it to the people. I actually took this story from Huichol mythology. The people’s observations of the world around them were acute—they had to be in order to live. Fire was considered the Great Transformer, because nothing that enters fire comes out the same ever again. Of course this is a world-view that I constructed based on ethnographic research, and certainly cannot be “proven” to be “correct.” It’s fiction, after all. We’ll never know exactly what they thought, of course.

How did you get the background information you needed about these people and their lifestyle?

I did years of research. I didn’t start actually writing until I thought I knew enough to begin. Even then I would have to stop every other paragraph to look something up. I wanted to be as accurate as possible, based on what archaeologists and others have discovered. Sometimes translating those scientific papers, etc., into language for the general public is not easy! But I wanted to share what is known about these people with a wider audience. I also visited the Lower Pecos many times and was lucky enough to tag along with a few archaeologists so I got to see and experience many places inaccessible to the public. I was fortunate enough also to study for a short time with one of the most important researchers of that particular rock art. (Photo: Rock art panel in Fate Bell Shelter, Seminole Canyon State Park, Texas)

What do you want readers today to know about ancient peoples?

I want people to know that these ancient people were fully human, with complex thinking, planning, and organizing skills. I find many Americans today know little about the ancient past and therefore fail to celebrate the ingenuity of all human beings.

What are you working on next?

I’m writing a brief travel guide to the Lower Pecos. It will be divided into three sections: Environment, Rock Art, and Towns and Ghost towns. After that I’ll start the second novel, about the female shaman who seduces Deer Cloud in book number one.

You can find Mary S. Black’s book Peyote Fire on Amazon.com.  She says the Kindle version should be out soon.