If someone asked you to draw the tree of life, you’d probably draw a tree trunk rising in the center, surrounded by spreading branches.  Maybe you’d draw a circle around the image, or perhaps the foliage

would create a circle.  If you drew a Tree of Life like the one on the trivet pictured on the right, which is identified in a sale catalog as a Tree of Life, what makes it a Tree of Life rather than just a tree?

The answers are varied because the image has many forms.  The one on the trivet is a very plain variety. Others

hold many animals in their branches, including those that never live in trees (like deer or lions) or contain elements that don’t go with the tree, like giant flowers. Or very stylized branches and foliage, like those pictured in the drawing (right). 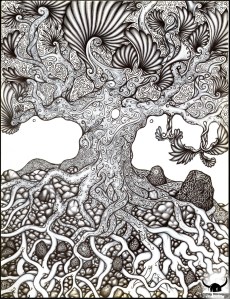 Often, the image contains a clear pairing of opposites, such as the foliage fan contrasting with the root fan.  Or the presence of the sun and moon.  Or a bird in the branches and a snake in the roots.  In the tattoo illustration on the left, an eagle perches in the tree top while the dragon/serpent controls the lower part.

In many of the examples you’ll find on this post, the Tree of Life features male and female elements.  The trunk is an upright rod (male) while the branches form a fan or circle (female).  Sometimes the whole design is enclosed in a circle.  It’s a symbolic glorification of the union of opposites.

In some cases, the tree itself is simplified into a series of lines, but the intent is the same.  These are examples from Persian rug designs and from ancient Assyria:

Some Tree of Life images quite clearly indicate sexual union of humans, but the symbol is usually far more universal.  It illustrates the pairing of opposite forces that engenders creation in all of nature.  Thus the flowers and animals appearing in its branches. The fine pressed paper design by Kevin Dyer uses the oak tree, sacred to the Druids, to illustrate the pairing of opposites that results in new life, represented by the acorn cradled in its roots. 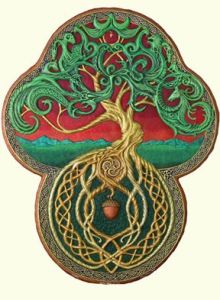 While the tree is often generic, as in the trivet, sometimes it’s a specific species, such as an oak (Celtic) or an ash (Nordic), an almond tree (basis for the menorah), a Ceiba (Maya), a Ficus (India), flowering yucca (Anasazi), or a wild plum (The Koran).  In other areas, an ear of wheat, a corn plant, or a thistle might be substituted.  Most of the time, the male (rod) /female (circle) balance remains.

In other examples, the tree is a mirror image, combining the power of positive and negative opposites, forming an arboreal yin and yang.

Because the Tree of Life is a very old symbol, it’s had many variations over thousands of years and probably many different meanings.  Certainly, the graphic elements of the rod and circle are some of the oldest known images found carved in stone.  The example on the left is from Italy, but similar figures appear all over the world. 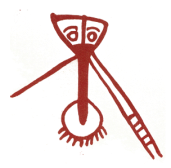 The rock art figure from British Columbia, Canada, on the right, shows a figure rising out of the combined rod and circle elements.  The stone carving  in the center is from Galicia, Spain.

While we don’t know what meaning the carvers attached to those images so long ago, we can interpret some of the more recent uses of the same image by asking the descendants of the carvers.  In some cases, the flowering of the combination of male and female is cosmic, as in the union of the earth and the sun, or

personal, as in this petroglyph from Crow Canyon, New Mexico.  The humpbacked Ye’i known as Ghanaskidi bears a sack full of seeds, decorated with feathers.  Similar to the Hopi kachina Kokopelli, he seduces the girls and then offers them gifts. He’s associated with harvest and abundance, increased fertility in humans, plants, and animals.

The peyote-driven yarn painting created by the Huichol Indians (Mexico) shows Tacutsi, the Goddess of Life,  giving birth to everything that lives.

The Importance of Trees

In some creation stories, the tree was literally the source of life, in that people, plants, and animals emerged from it.   In the Nordic epic, the Edda, the first couple: Askr and Embla, were created from ash and elm trees.  Ancient Indian tales mention a giant Ficus (fig) tree that granted wishes and immortality.  In Germanic myths, apple trees guarded by dragons grew the fruit of eternal youth.  Remains of apples found in a burial site in Sweden, dated to 1500 BC, seem to reinforce this idea.

The famous tomb lid of K’inich Janaab’ Pakal, in Palenque, Mexico, shows the dead Maya lord being reborn as the young Maize God on the Tree of Life.   Unfortunately, bizarre theories explaining this as the figure of an alien astronaut have become so widespread that people fail to see the very consistent Maya imagery used in the carving.  Pakal, who died as quite an old man, is dressed as the young Maize God.  His position is typically used to show a baby.  He lies just above the gaping jaws of the Underworld, but above him rises the cruciform World Tree that unites the three worlds.  At the top the creator god, Itzamna, perches.  Like the kernel of corn, he must be buried in order to be reborn.  This idea is reinforced by the turtle shell ornament he wears on his chest, a reference to the world being born out of the split back of a turtle.  Around the edges are images of the sun, moon, and stars.

Many groups around the world believed that dead people’s souls returned as trees.  Tree worship was common

in many areas in the distant past and persists in some areas to this day.  The photo on the right shows an honored spirit tree in Japan.

Because the Tree of Life was a powerful and popular symbol, it was incorporated into the monotheistic religions that replaced older animist beliefs. In ancient Babylonia, the Tree of Life was called Ea, and the fruits of it bestowed eternal life.  This is perhaps the source of the Old Testament Tree of Life growing in the center of Paradise. Judaism also incorporated that image in the menorah and the Kabbalah Tree of Life.  The Koran includes mention of the Sidra or Tuba tree, which grows in the center of Paradise.

Interestingly, the male/female dynamic that was so central to older representations of the Tree of Life was often played down or replaced by the central figure of the faith, who became the sole generative force.  In the image shown on the left, the tree of life image was used to represent Christ’s crucifixion on the cross (tree) as the source of life in the world.

In some cases, ancient tree worship combines with modern religious beliefs, as in the icon tree pictured on the left.  It also includes the idea of the tree rising out of the waters of life.

the Tree of Life.  Like the most abstract versions of the Tree of Life, it is a rod (the only path in) and a number of circles (which must be navigated in ritual stages), with a six-petal flower at the center of the circle and end of the rod.  In this case, the flowering is personal and spiritual, rather than sexual or universal.  The pattern pictured on the right is most commonly used in contemporary labyrinths.  It’s based on the design in the Cathedral of Chartres, France, built in 1220 AD, though the earliest surviving labyrinth was found in a rock carving in Sardinia, dated to 2500 BC.  Others were found in Crete, Syria, Greece, and Egypt.  At one time, walking the labyrinth was a popular spiritual exercise.  And it’s coming back into favor.  Over fifty turf labyrinths are currently found in England, Poland, the Czech Republic, Denmark, and Sweden.   The Labyrinth at Grace Cathedral in San Francisco, California has been so successful that church leaders had to make portable versions to take to other locations.  Dr. Lauren Artress, who spearheaded the effort to establish the labyrinth at Grace Cathedral, notes in her book, Walking a Sacred Path: Rediscovering the Labyrinth, that the Chartres labyrinth references the moon, sun, Mercury, Venus, Mars, Jupiter, and Saturn as elements of the whole that one enters when walking the labyrinth.  How interesting that the ancient sense of wholeness, including the sky world, is now popular among church goers in San Francisco!  Many people have said that the experience of walking the labyrinth was transformative and included an element of the feminine and spiritual that they felt had disappeared from the Christian church.

The photo on the left shows an open-air version of the labyrinth. Unlike a maze, the labyrinth does not involve solving puzzles.  The path is very straightforward, can be walked at any pace, and can be used as a guide to meditation.

So the trivet, the item we saw initially as the Tree of Life, is actually a stripped-down version of an ancient symbol.  It’s lost most of its sexual and spiritual elements, yet it retains something of its history and power.  That’s why it’s so popular. 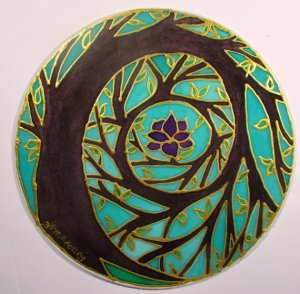 Bjornson, Anthony, “The World Tree or Tree of Life,” norsespirtualism.wordpress.com

“The Tree of Life,” Learning about Rock Art, http://www.angelfire.com/trek/archaeology/tree.html

“The Tree of Life” Symbol Dictionary: A Visual Glossary, http//symboldictionary.net?p=34

“Tree of Enlightenment mandala” from Heaven on Earth Silks, www.etsy.com/listing/182211309/treeofenlightenment

“Tree of Life mandala,” from Heaven on Earth Silks, www.etsy.com/listing/117394192/tree-of-life-mandala

Wire Tree of Life on Agate, CrowsFeather Art, on Etsy