The “fat boys” are sculptures usually associated with Olmec/Maya/Izapan sites in southern Mexico and Guatemala, especially near the Pacific coast.  They look very different from the sophisticated sculptures we usually associate with the ancient cities of that area.  They’re stumpy stone figures of very fat humans, with a big ball for the bottom and a smaller, flattened ball for the top.  The arms can barely stretch across the wide belly.

I first saw one of these sculptures at Takalik Abaj (See photo), an Olmec/early Maya major trade site near Chocola, where I was part of an Earthwatch team helping with a dig.  The basalt figure stood about 4’ tall, with a flattened head and an enormous belly. Kaminaljuyu, just down the way from Takalik Abaj and now mostly absorbed by Guatemala City, had the greatest number of “fat boy” sculptures discovered at a single site.

Some of the fat boy sculptures are so worn, they look like blobs, with no indication of features.  Tourists often pass them by without a second glance.

Yet hundreds of large and small versions of the “fat boys,” as the sculptures became known after their discovery, have been found across the Isthmus of Tehuantepec in southern Mexico, through modern Guatemala, and down into Honduras, Belize, and El Salvador.  Why were they so popular over such a wide area?

Some of the sculptures, also called “potbellies,” featured a collar around the figure’s neck, possibly a sign of wealth.  Many were situated on pedestals.  Some had a prominent navel.  None had specific genitals that would identify it as male or female, though a few had a bulge at the bottom.

Dating stonework is always difficult, but researchers found the task even more difficult when they realized that many of these sculptures had been moved from their original location and reused or perhaps traded. The ones near La Democracia, Guatemala, (See photo with a fat boy, a fat boy-style head, and local traffic) had been moved and buried.  They were discovered when workers were digging up a sugarcane field.  Official guesses about their age have varied from 1500 BC to 500 BC.

The stone itself may have come from the Pacific Piedmont area near the border of Guatemala and Mexico, or from the Tuxtla Mountains on the Gulf Coast side.

Interpretations are varied and conflicting.  Some experts said the sculptures represented dead people with bloated bodies.  Or burial markers, although only three examples were found associated with burials.  Or rulers whose corpulence showed their wealth.  Or ancestors.

Although it’s hard to date these figures, it seems the earliest versions were numerous, quite small, and found in individual households, not public spaces.  The one found in Tikal (MS 81), which Michael Coe described as “an incomplete, minor pot belly sculpture,” is an example.  What purpose could this sculpture have had that made it important to have in regular households? 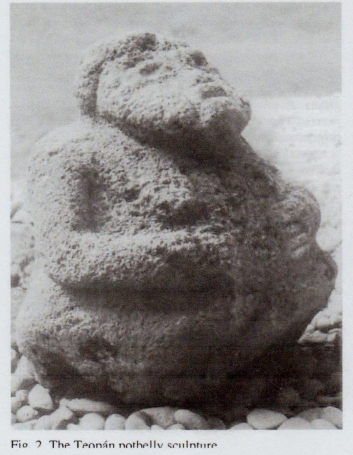 A new find provides a clue

In 1996, a previously unreported pot belly sculpture was found near Teopan, on an island in the caldera of volcanic Lake Cotepeque in western El Salvador.  What made this sculpture so important was its excellent condition that made it possible to see that the figure was clearly a very pregnant woman, probably engaged in giving birth. (See photo)  In a letter dated 1576, Spanish official Diego Garcia de Palacio described a “large stone idol in the form of a woman” on an island in the same lake.

Archaeologists are slow to change their minds, but the evidence seems to be piling up that the “fat boys” were neither fat nor boys, at least in some cases.  They were females embodying the concept of fecundity.  Perhaps they functioned as charms for safe and successful childbirth, or as an Earth Mother figures.  Certainly, figurines of pregnant women giving birth are quite common in ancient Mesoamerica and South America.  The Santarem pottery piece featured in the photos below shows a pregnant woman giving birth. 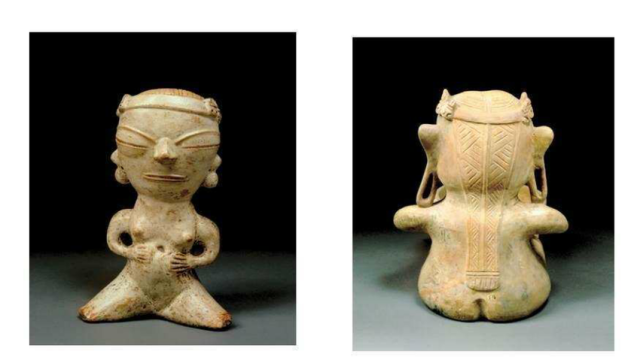 But there’s also a whole different side to the potbellied figures.

Some of the potbellies are lodestones!  A lodestone is a natural magnet, and like any magnet, is capable of attracting or repelling other ferrous metals as well as temporarily magnetizing other objects with iron content.

The lodestone “potbellies” are, like their non-lodestone cousins, carved out of magnetite, a kind of iron ore.  But only a small percentage of magnetite stones are lodestones.  Geologists do not completely understand how some stones become magnetized, but the most common theory is through a lightning strike. Perhaps a bolt of lightning is enough to align all the charges of the ions in the stone. (Interesting that the ancient Maya often pictured black stones at the bottom of lightning bolts.)

In 1976, Vincent Malmstrom and his assistant, Paul Dunn, discovered that when a compass was held up to one of the “potbellies” at Monte Alto, the needle reacted.  It swung away from true north and pointed to the stone.  When they tested others potbellies and giant heads on site, they found the needle was sharply attracted when they held a compass to the navel of some statues and to the right temple in others.  The magnetic force of the stone was far stronger than the magnetic field of the earth.

Four of the five “potbellies” in La Democracia, Guatemala were found to have these magnetic arrangements, as well as four of the six giant heads. Though he searched, Malmstrom found no spot indicating material had been inserted into any of the sculptures he tested, so he concluded that the skilled carvers were aware of magnetism, could identify lodestones, were able to work them, and knew exactly where the poles were in the rock, so they carved the statues to take advantage of that arrangement.  He found other magnetic sculptures in the Soconusco region, including a turtle/frog head, a rearing jaguar, and two men seated on a bench. Malmstrom thought the sculptures were pre-Olmec in origin, dating them to 2000 BC.  That date has not held up well under scrutiny by archaeologists.

What has lasted is Michael Coe’s extraordinary 1968 find at the Olmec site of San Lorenzo, (photo by John B. Carlson) much closer to the Gulf of Mexico side of the Isthmus – a small, carefully-shaped, polished rectangular bar of hematite, dubbed M-160.  It was broken in ancient times and broken again in the course of study.  However, it showed remarkable refinement in its construction and, when floated in water or liquid mercury, it consistently aligned to the same point, west of magnetic north, the same orientation as the buildings in the Olmec sites of San Lorenzo, La Venta and others.

The magic of magnetism

It’s interesting to guess how this knowledge might have been used.  In addition to direction finding, especially when combined with star lore, magnetism had to appear to be magic.  It still does.

For about ten dollars, you can get a set of small lodestones and do your own experiments.  You can magnetize pins and paper clips and make them move other pins without touching them.  Or make some move toward the lodestone and others scoot away.  (You can also ruin your electronics if you pass the lodestone over them!)  If you hold a paperclip on a string near a pole on the lodestone but not touching it, the paperclip will swing back and forth as if it’s frantic to reach the pole.  It doesn’t take much imagination to see all of this being used in a show of magic and power in ancient times.

In that sense, then, with the introduction of magnetism, the “potbellies” may well have morphed from a Mother Goddess/ birthing figure to a general power figure, one rulers would want to possess, display, and manipulate.  As Preclassic expert Julia Guernsey notes, “Importantly, rotund bellies were a frequent and long-standing attribute of Preclassic figurines, sometimes alluding to pregnancy and in other cases appearing to reference obesity.”

Unfortunately, we have very little data on how many of the figures were constructed to take advantage of magnetic poles and almost no information on their use.  It does seem that the cluster of finds near Soconusco/Monte Alto/ La Democracia suggests a large-scale production of the figures from lodestone magnetite found in the area, perhaps for trade.

Some experts believe that the ability to find and use lodestones as well as how to use them came from Asia and the Pacific islands, carried across the sea by long-distance sailors who already knew about their uses as a navigational aid.  While the idea is often dismissed as far-fetched, it’s a possibility I pursue in Past the Last Island.

Amarolli, Paul. “A Newly Discovered Potbelly Sculpture from El Salvador and a Reinterpretation of the Genre,” www.fundar.org.su/referencias/teopan.pdf

Jenkins, John Major, “Some Iconographic and Dosmological Observations of the Symbolism of the new Stela 48 from Takalik Abaj,” Alignment, 22 April 2008, http://alignment2012.com/Takalik48.html